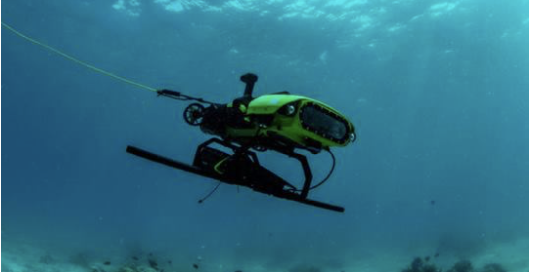 The Great Barrier Reef has a new robotic ally.

In September, the RangerBot, developed by researchers at the Queensland University of Technology (QUT), began patrolling the Great Barrier Reef, hunting down a deadly starfish that wreaks havoc on coral, in addition to mapping and monitoring the Reef's health. Now, that deadly drone has been engineered to not just take life, but deliver it, too.

A collaboration between researchers at Queensland University of Technology (QUT) and Southern Cross University (SCU), the LarvalBot is able to deliver baby coral through the Great Barrier Reef like an "underwater crop duster.

"It's like spreading fertiliser on your lawn," says Matthew Dunbabin, professor at QUT and developer of the drone technology. "As [the drone] glides along we target where the larvae need to be distributed so new colonies can form and new coral communities can develop."

From October to December, parts of the Great Barrier Reef undergo a massive coral spawning event, where many of the coral species release bundles of eggs and sperm from their gut cavity into the water. The bundles float toward the surface and fertilize, creating a coral larvae before settling on the ocean floor and, eventually, developing into a colony.

During the spawning event, researchers at SCU collected the bundles and cared for them, readying them for dispersal via drone. This process was perfected by a team led by Professor Peter Harrison and involving researchers at James Cook University and the University of Technology Sydney.

Loading 100,000 larvae into the LarvalBot, the researchers were then able to use the drone's smarts to locate specific sections of the reef that would benefit from coral redistribution. Operating the drone via iPad, a researcher was then able to tell it to drop its payload -- hundreds of thousands of coral babies -- into the reef.

It's kind of like a Great Barrier Reef version of Hans Christian Andersen's The Storks.

Importantly, this was just the first trial that the killer drone technology could be reengineered and deployed for a different purpose and so far it seems to have worked as intended. But it's not the end -- in 2019, the team will look to catch and care for even more coral larvae, using the LarvalBot to resettle coral on damaged parts of the reef.

"With further research and refinement, this technique has enormous potential to operate across large areas of reef and multiple sites in a way that hasn't previously been possible," stated Professor Harrison.

The Great Barrier Reef, a World Heritage Site, has undergone numerous coral bleaching events and suffered at the hands of climate change and pollution for decades. The drone technology is part of wider efforts using technology such as artificial reefs, simulations and updated mapping techniques to attempt to restore and protect the site.