Drone soccer takes off in America 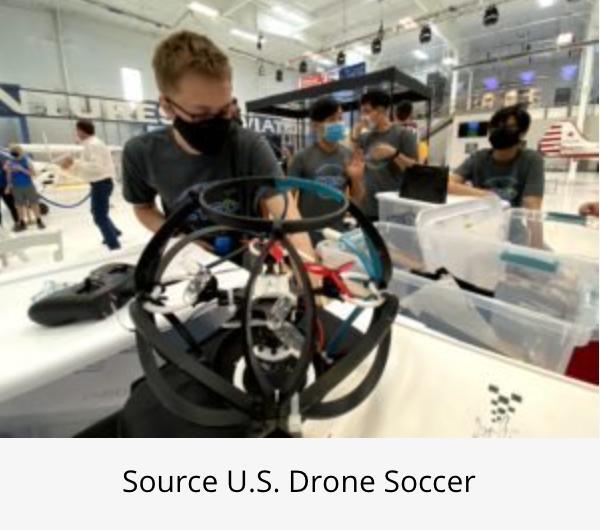 With so many aerospace and defense companies, it’s no surprise that Colorado Springs is flying high with the latest cousin of Harry Potter’s high-flying Quidditch.

On July 31, the first-ever drone soccer tournament will kick off at the Rocky Mountain State Games (RMSG), Colorado’s largest multi-sport festival for athletes of all ages and athletic abilities.

What is drone soccer? Read on.

According to U.S. Drone Soccer, the sport is “a thrilling indoor team sport played with remote controlled hobby quadcopters that are safely enclosed in protective plastic spheres.”

“One drone on each team is designated as a Striker that can score points by flying through the opposing goal. All other drones are defending or blocking by intentionally colliding with the opposing team. The standard playing area can fit inside a classroom – a 10’x20’ (3mx6m) netted arena.”

The program began with “Wings Over the Rockies: Exploration of Flight” in May. “It’s the first drone program I’ve seen that is based in teamwork,” U.S. Air Force Maj. Kyle Sanders told Military Times. “It’s spectator-friendly and it can be an on-ramp for students into science and technology.”

“One player per team navigates the specially-marked Striker drone to score through the other teams goal. The other players work to block either the Striker or opposing drones with full-contact collisions. The drones have a plastic exoskeleton that make them able to sustain hits from opponents. The game has a triad of three minute periods and team members must be able to repair their drones on the fly (literally) to continue the game. While playing, students learn real-world skills that translate into different career fields including aviation and aerospace.”

A spokesperson for U.S. Drone Soccer says the program is designed for the classroom and has been vetted by educators:

“Starter kits include everything needed to establish a new drone program and engage one or several groups in hands-on learning. Students who are eager to compete can join an extracurricular team and compete in a local academic league and regional tournaments. Students will not age out of Drone Soccer but be able to progress to a larger drone class at the collegiate and international level.”

“The goal is to show them future career paths,” Sander added. “If we can get them excited with the game, they’re going to build and program the drones and not realize that those skills can immediately go into an aerospace career that even in high school, they can get paid to do this.”

Jason is a longstanding contributor to DroneLife with an avid interest in all things tech. He focuses on anti-drone technologies and the public safety sector; police, fire, and search and rescue.