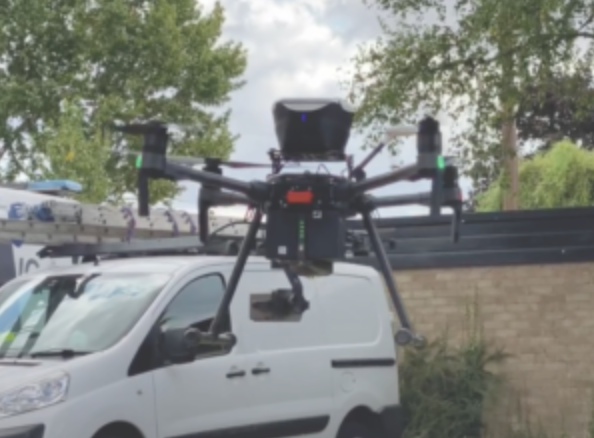 DRONELIFE (DL): 2016 was really quite early to get started with a drone program.  How did that come about?

Darren Deex: We started researching the operational benefits of using drones after we hired a private company to capture aerial photographs of a Colchester park following a murder investigation in 2014.  In 2016, another police force approached us after hearing of our drone capability.   We were asked to search a large area of land following an investigation because foot and helicopter searches offered some risk.

This cemented the operational effectiveness of using drones and drone use in the department has grown significantly since.

Getting the Community – and the Force – On Board

DL: How has the community embraced police drone use?  Do you work to communicate the safety benefits to them?

Darren Deex: We were initially cautious about how we used drones because of public mistrust: we had found that the helicopters, which have been widely used for years, had more appreciation and support.  We have made sure that our drone use is compliant with the legislation and we are logging every flight.

We have been raising awareness of our flights through social media because we want people to know that we are using them to help people and communities and for genuine policing purposes. This has been positively received.

DL: You have quite a large number of trained pilots.  How have the officers reacted to the use of drones in the force?

Darren Deex: We have been inundated with requests from officers looking to get trained.  The drones have proven their effectiveness and generally police officers come to work to do their job to the best of their ability and if there’s a tool that makes them more effective they want it.

We have certainly noticed a significant increase in the variety of incidents we attend and we are in demand.  Drones attend nearly all planned firearms incidents, they are helping to search hard to reach areas on land, by the coast and at sea and our emergency colleagues regularly request our drone support.  We are also one of the only forces in the UK that can fly within the grounds of an airport.

DL: Have you worked with a particular state or federal agency to help establish your program and work through the regulatory issues?

Darren Deex: There has been a lot of good practice shared throughout the country, particularly in the eastern region.
We have also shared learning and experiences with many other emergency services and we have made flights for various other agencies for a variety of reasons.

We have found that the Civil Aviation Authority have been incredibly helpful, proactive and permissive in our use of drones.  We had a really good first audit with them and this gave us the confidence to know that we were flying responsibly and lawfully.

All Drones Drones in Law Enforcement